I’ve photographed the Steeples Of First Church before. Usually it’s in the early morning or late in the evening. However, I’ve been meaning to taken a day time image of First Church for a while. It’s one of those land mark locations here in Dunedin that’s an important part of the city. It’s primary congregation was the Scottish Free Church settlers who first landed in Dunedin in the 1840’s. Plus, it’s got an awesome gothic feel to it. There’s little wonder it’s is regarded as one of the most impressive nineteenth-century churches in New Zealand.

Season of colour and warmth

In yesterday’s blog post Autumn In The Inner City I mentioned that after identifying an Autumn colour palette, I then went out in search of Autumn in the inner city. My goal was to find Autumn scene’s that also showed parts of the city. This is an image I found at Otago University with the old University clocktower reflecting in the windows of the Centre of Innovation with a Japanese Cherry tree sits in front.

I was watching a home decorating show the other day. Just why I was doing such a thing I can’t recall however it was one of those shows where a designer is given a hopelessly inadequate budget in which to update a mammoth amount of rooms in the space of only a few weeks. The project, from memory, was started in November and of course the family wanted it to be finished in time for Christmas. When they presented the designer with this timeline and budget, after much rolling around on the floor laughing, she politely told them they were being a tad hopeful and optimistic. This I discovered was interior designer code for not standing a snowball’s chance in hell of getting it done.

To sum things up and skipping to the end of the show, they went massively over budget and apparently two years later the job is still not finished. However, I did learn a few things from this programme. Firstly, I have no understanding how to place furniture in a room. If furnitureplacementdyslexia was a thing, then I’d have it! Secondly, I wanted to start thinking in terms of colour palettes.

A few days later after much reading I identified my autumn colour palette as based on warm yellow undertones mixed with oranges, reds, ochre and olive colours. It is also offset with earthly brown’s taken from the natural world such as rusts. I also discovered that this colour palette mixes wonderfully well with textures. And so, with my palette identified, I went out in search of autumn in the inner city.

Autumn In The Inner City

Where do the autumn leaves go?

I’ve been out hunting the Autumn vibes around Dunedin recently. Usually I head out into the bush and take in a few walking tracks while listening to bird life. This year however I’ve been more focused on finding signs of Autumn in the inner city and seeing how I can combine the two elements.

Taking photos in the city always feels rushed for some reason, no matter how much time I take. I think it’s the constant flows of traffic and people. For a change of pace I headed up to Ross Creek to watch and listen to the bush. After sometime I found part of a stream where the Autumn leaves kept getting trapped in the rocks before getting swept away. I wander where they end up?

Autumn on the rocks

I spent a pleasant morning casually wandering around various buildings that made up the city centre. I’m not sure when, but at some stage I headed through a mall that seemed to have a very interesting structure to it. In it I found this very funky ceiling. It’s outside the vegetarian and vegan deli Let Them Eat Vegan. It’s a very popular locally owned vegan deli here in Dunedin with lots of yummy homemade meats, cheeses, mayos, sandwiches and baked goods. If you wanted to call in and see them here are the details:
What’s Good? The Baguettes are outstanding! The great thing is their menu changes everyday so you knows it’s fresh and never boring.
Address: Albion Lane, Dunedin, New Zealand 9016
Open: Tuesday to Friday 11;00am – 8:00pm, Saturday 9:00 – 3:00pm 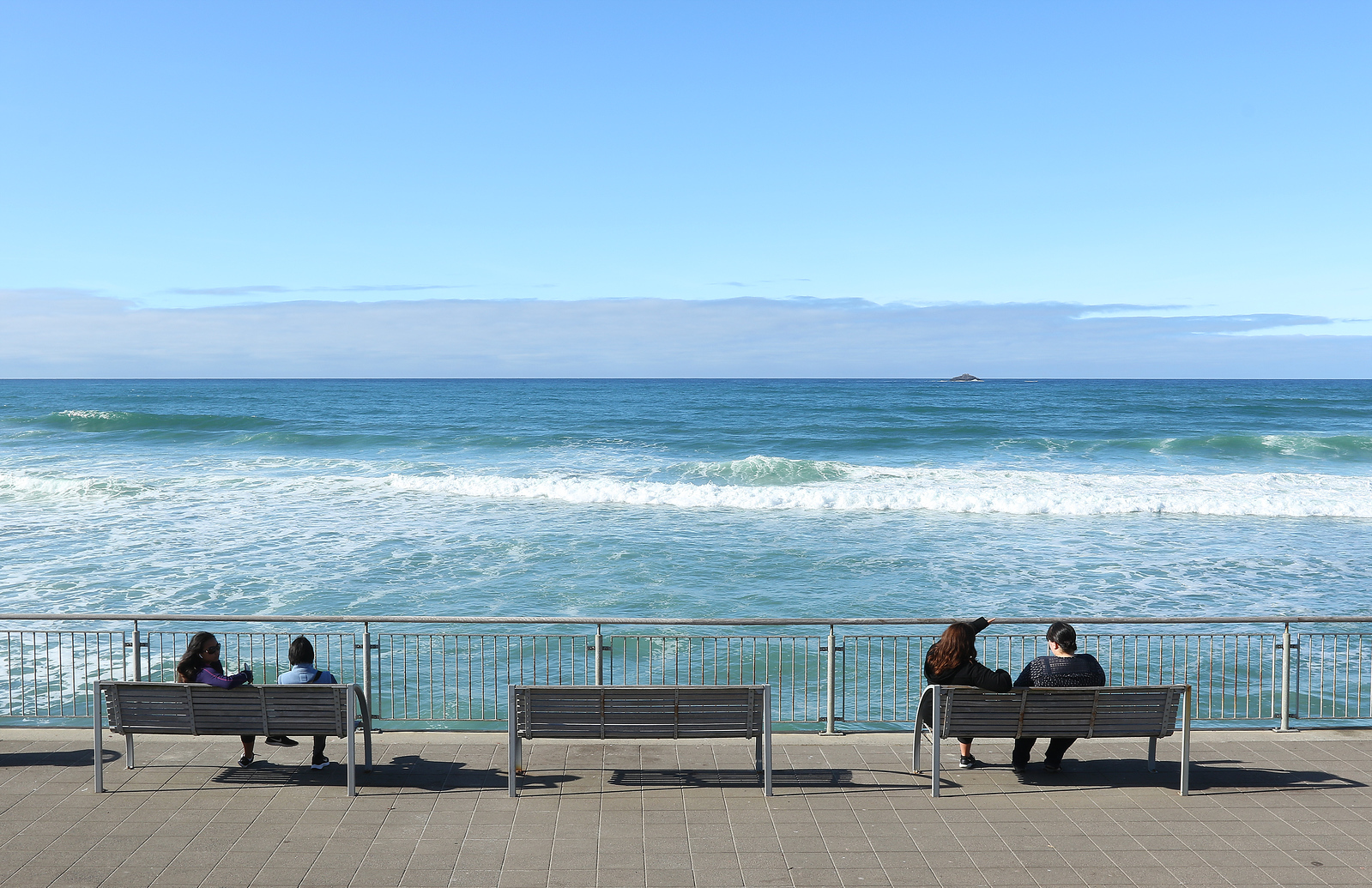 A Moment of Mindfulness

I wandered past the various eating establishments that had an abundance of offers for foot traffic like myself. They all seemed very enticing but considering I hadn’t actually done anything that morning beyond get up, they all seemed a bit lavish. In the end, after wandering in the delicious warmth that can only be provided from the sun on a public holiday I settled for a coffee from a local cafe called Star Fish. Happy and content I went on way.

I went for a walk at dawn the other day. Here in Dunedin there’s been a few good sunrises recently so I thought I should capture at least one of them. The great thing about being surrounded by so many hills is that there’s always lots of good options to view them from. Personally, I enjoy the beaches at St Kilda and St Clair. I took this looking over the Long Dog Cafe and Salt Water Pool on the Esplanade as people were coming and going for their early morning dips. It’s not a bad spot to have a coffee and read the paper on a Monday morning.

Yesterday I mentioned how wonderful the Otago Harbour is and a few of the things that make it simply splendid. Well, the Otago Peninsula is just as good. There’s all sorts of tracks and paths to adventure along, old buildings to explore and sights to be seen. If you’re after wildlife, a little bit of preplanning is the way to go but as long as you have good walking shoes there’s heaps to see and do. Even on days like the one above when the low cloud, mist and drizzle take hold it’s a unique experience. It’s little wonder so many artists have used it as inspiration.

One of the best things about Dunedin is the Harbour. It’s simply splendid in so many ways. It may not be the big, grand showpiece that is Sydney Harbour, however there’s something close, personal and intimate about Dunedin’s Harbour. In one day you can see Albatrosses, Seals, Sea Lions, Penguins, go for a ferry ride, go fishing, visit art galleries, undertake any number of water sports, enjoy the many picnic areas, walk, run, cycle and of course enjoy any one of the many cafes, bars and restaurants that can be found at various locations.

Also, if you get up early in August you can have a view like this from the Ravensbourne over bridge as the sun comes up.

Life of the Sunflower

This week I’m having a change of pace. No words (well, no more than 26) or travel story/writing. Just some of my favourite creative images involving textures.